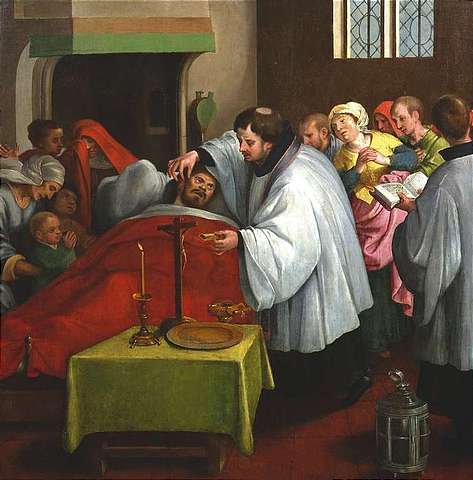 Last Rites or the Celebration of Viaticum is given to the dying to assure forgiveness of sins and entrance into heaven and is composed of communion (called viaticum or food for the journey) and the Apostolic Pardon. Ideally the person has already received anointing of the sick and reconciliation, although these can be repeated as needed. If the person continues to linger for days after the administration of the last rites it is encouraged to call the priest so that the person can receive the eucharist as viaticum again.

Why are last rites so important?

In addition to assuring the forgiveness of sins and entrance into heaven, it is important that the person receive what is known as the Apostolic Pardon, which allows a person whose sins have been already forgiven, to forgo the painful perfection process after death that is known as purgatory. Prior to passing from this life to the next, Holy Mother Church wants to do all that is possible to assure that her spiritual children receive all possible graces and preparations for eternal life, which is why reception of all of the last rites is so important.

Do not wait until the last for last rites!

Last Rites are important which means that it is better to get the Last Rites earlier rather than chance not having them administered. It is sadly not uncommon that a family will wait until the very last to call a priest and then not be able to find one available. Last Rites can be given to a person who is dying either because of illness or old age. It does not have to be imminent. The Church simply uses the word dying rather than the word imminent and the word dying is to be interpreted liberally. If a person is dying, even if death is still months away, call the priest and request last rites so that the dying person is ready should death come sooner than expected.

There is great danger in waiting to administer last rites until the person is unconscious. If a person is unconscious there can obviously be no Confession of Sins or Holy Communion. The Apostolic Pardon can be given, but it only removes the purgatorial punishments for sins which have already been forgiven. The person can only receive the Sacrament of Anointing with oil which does not ordinarily forgive mortal sins, but only Venial (less serious sins), and this is a major problem if the person has mortal sins in need of the forgiveness which comes ordinarly through the Sacrament of Confession (Catechism of the Council of Trent II.VI.XIV). It is dangerous to wait to the very last to have last rites administered.

However, if you have waited too long to call for a priest, all hope is not lost. If the person had a disposition of repentance prior to becoming unconscious (for example, the person was planning on going to going to Confession with a priest or the person was contrite and sorry for sins), the Sacrament of Anointing will then be able to remit even mortal sins (Baltimore Catechism 446, CCC 1484) and the Apostolic Pardon will then be able to remove all purgatorial punishments. If you have waited until the last to call the priest, you can place your confidence in the hope that the dying person had a contrite heart and in the mercy of God who knows the heart.

Who can receive last rites?

What is the difference between Anointing of the Sick and last rites?

Last rites, on the other hand, can only be given to a person who is not only in the beginning of being in danger of daying, but is dying because of old age or illness. Hospice is a good anology to this. A person may be placed on hospice (comfort care) due to illness or old age when one decides to forgo curative treatments and instead accept the fact that the person is dying. Likewise, a person who is dying due to old age or illness can receive the last rites.

While it is not uncommon to receive the last rites with little to no to no preparation, ideally this is celebrated while the dying person is still able to take part and respond.